Well, it didn’t take long for us to find that tranquility we so longed for after our stunning but crowded detour through the Grand Teton and Yellowstone National Parks.

Although we do seem to have paid with our blood for what we gained in terms of remoteness and lack of people – the mosquitos were back and in worse numbers than ever!

But first it was an easy 20- something paved miles leaving Yellowstone West on the State Highway 20 (and briefly entering Idaho!) before we rejoined the official route on Red Rock road and just past Henry Lake.

As it happened, back in Jackson at Brandon and Emily’s house, Rebekah, Brandon’s sister with the adorable 13 months-old twins Alyce and Landon, told us how her house is actually right next to the route some 250 miles north and that we’re more than welcome to stop there even if she won’t be back in time. We listened carfully to the location description, took the house number, mobile number and circled ‘Lakeview’ on our map. As so many times before during this journey we were super grateful for the offer but at that point it was hard to tell when we’d get there and whether we’d be comfortable enough letting ourselves into somebody else’s house…

5 days later, too tired to push on for another 50 miles to get to the next small town and with little camping options on route (have I mentioned the mosquitos?) we realised just how lucky we were to have bumped into Rebekah, (Brandon and Emily) yet again.

Lakeview is a tiny community at the heart of the Red Rock National Wildlife Refuge situated in the stunning Centennial Valley and as Kyle, Rebekah’s husband, does wildlife research for the refuge (currently on the habitat of grouse) they have been getting a great deal on the (government-owned) house. There’s a little visitor centre, I’d say a dozen of houses (including one owned by the a university of Utah!) but no services. 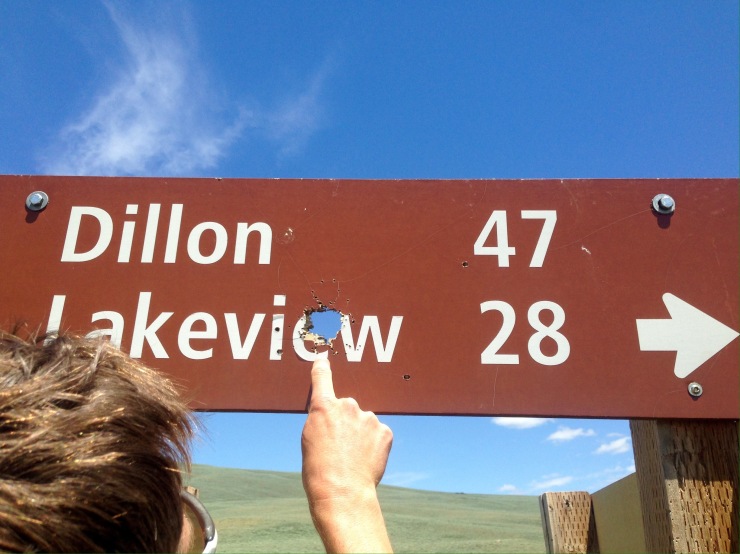 We got to Bekah’s and Kyle’s house just as a heavy storm moved in and after a quick chat to the neighbours to fill them in and with their further encouragement we did let ourselves into the house. 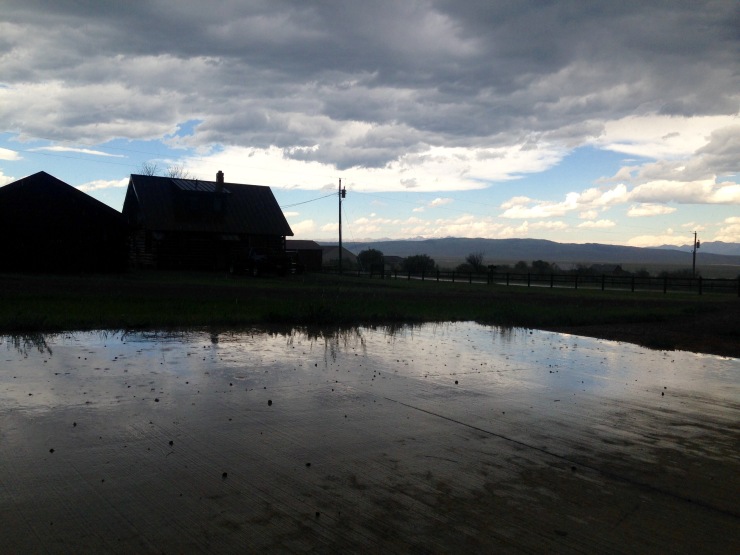 Odd but a lifesaver, both in terms of weather and bugs. Thankfully, it wasn’t long until Kyle was back from his field trip (Rebekah was still down in Jackson) and we were met with yet more amazing generosity including dinner, wine, a shower, a bed and of course perfect company. Thank you! 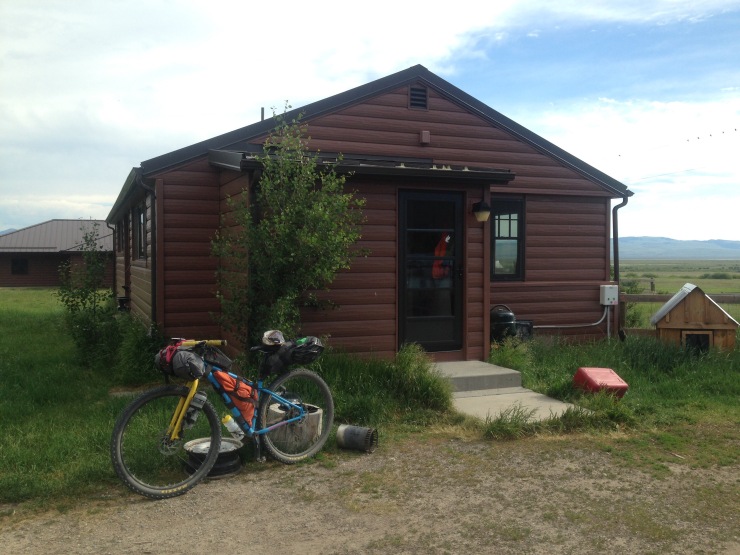 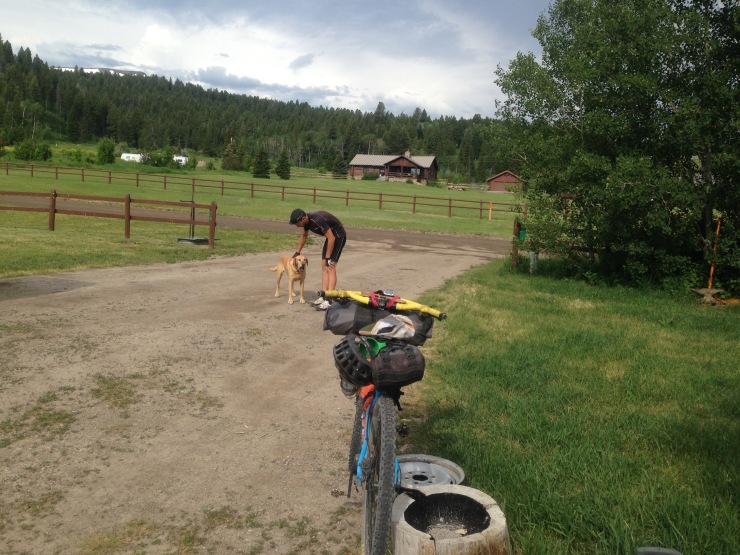 The next morning the sky was overcast but it made for possibly the first gloomy weather start we had in 30 days of riding. Not bad really and quite a nice change from the heat.

With relatively smooth gravel roads – apart from the odd sandy interlude – the surface was similar to the day before and progress was made easily. The view opened up even more and the sun (and heat) returned as we reached Lima. As you may have guessed, this isn’t the capital of Peru but a 227-strong southern Montana town which is worth seeing only if you’re into the 1970s.

But it wasn’t just the decor that wasn’t updated since the 70s, neither were the prices and at just $5.35 to put our tent up in the local RV park (plus an extra $2.50 for a shower and a dollar to do our laundry) we treated ourselves to dinner in the local cafe. 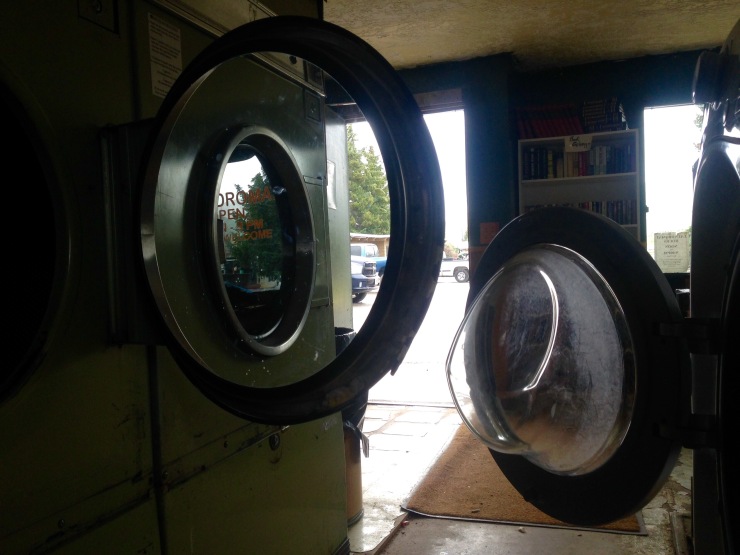 We also met quite a few hikers and divide riders around the RV park, one of which was east coast-based percussionist Payton MacDonald who’s also been riding northbound  but with a super interesting project to complete – at every continental divide crossing he’s been performing a piece of music specifically composed for the route. Check out the details at sonicdivide.com – we hear there’ll be a film at the end too, good luck with it and the rest of your journey buddy!

Clearly, people ride the divide (or simply ride) for many different reasons. I feel super privileged to be able to do it with my partner, I know not everybody is lucky enough to share such an enjoyable but time-consuming passion within their relationship. However even we had to talk things through, making sure what we want to get out of this trip is compatible.

I’m very much about having an aim and getting from A to B and my sense of reward and satisfaction would often come from having reached that destination or completed a certain mileage.

Rich on the other hand rides for riding sake and I feel lives much more in the moment. I envy him for that but it also means that monotonous stretches may prove more of a challenge in terms of motivation and he’s much happier to stop and take in the view/detour/faff 🙂

In any case, it’s vital to work as a team. I’m glad Rich makes sure I won’t rush past some incredible scenery and won’t push myself too hard and I guess my role is reminding him of the bigger for picture and greater achievement of this undertaking when things get a  bit monotonous. It’s certainly the sort of thing that will test you but eventually bring you even closer together! ❤️
But enough of that now and back to our progress: For day 33 we agreed on a slightly longer mileage to reach Elkhorn Hot Springs but half of the 70+ miles would be on tarmac.

Even more so than usual there was hardly any traffic even on paved stretches, that’s apart from the ground squirrels, bouncing across the trails in almost regular intervals or popping their little curious heads up from underneath the many cattle grids.

With intensifying headwinds the riding got a little tedious despite good surface but we eventually made it to Elkhorn Hot Springs and what a place it was! Fancy really isn’t the word but there was a great honesty and warmth (in the truest sense of the word) to it. A lodge (built in 1920), some cabins and, of course, the hot springs was all there was to it but we loved it! 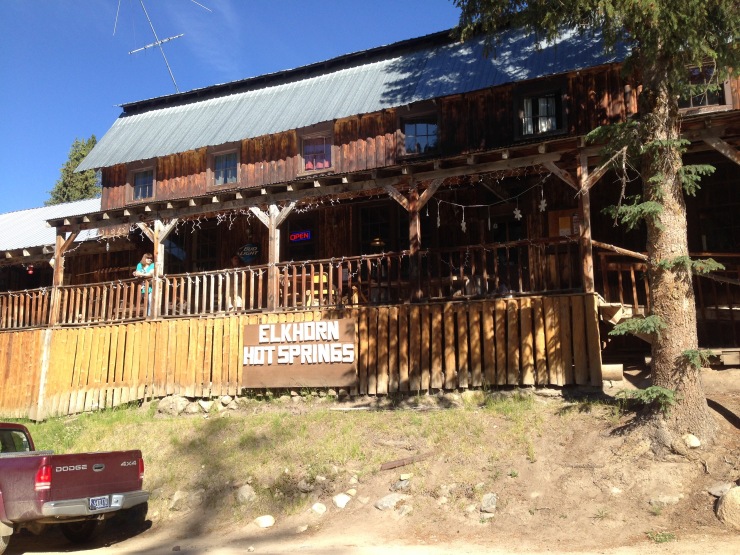 Day 34 started with a big question – to Fleecer Ridge or not to Fleecer Ridge? This ridge, only about a mile in length and found on the official route between Wise River and Butte, MT, is one the most talked about stretches of the whole route. Why? Because it’s so goddamn steep it’s unrideable, particularly for northbounders.

With a dodgy knee and a bike so heavily loaded I can barely pick it up, Rich would have been happy to take the alternate but I really wanted to see what it was all about and would’ve been prepared to do it solo but in the end we both went for it.

Some motivation was found when we bumped into two previously encountered riders from Michigan in Wise River – Brian and Alex – just before the turnoff.

Unfortunately we all went the wrong way for a good 5 miles and all uphill and had turn back but eventually got to the ridge. There is absolutely no mistaking this one, it’s like hitting a wall.

Rich looked up it in disbelief for a few minutes, I thought I better get pushing not to risk him changing his mind.

About an hour and some intense, combined pushing effort later we finally reached the top of this 0.9 mile monster (the first half of which is at almost 40%).

What followed was a long downhill stretch but Butte was still more than 30 miles and another continental divide crossing away. At mile 28 to go and almost 6pm we passed the Interstate 15 and after a quick look on the map/phone decided to jump on it, thereby cutting off a good 10 miles.

It was a huge highway, as you can imagine, but thankfully quiet and with a generous shoulder.

We made it to Butte eventually and were ready for some substantial food and a rest. We were even considering taking the following day off as surely this big city – by GDMBR standards (34k people) – would be the perfect place to stop after 15 days of riding without a break.

However when we got here we weren’t so sure. Despite the beautiful, mountainous backdrop, the city felt very industrial and all we could find to suit our budget that night was a KOM-campground which charged an extortionate $40 to put our tent up. What a stark contrast to the $5.35 two nights previous in Lima..

Anyhow, at least we managed to find a pretty nice Italian restaurant and probably had the best dinner since El Bruno’s in Cuba, NM.

Never mind the bad selfie/self timer action, love this image so much. Four years ago! 😱
Set forth! .
Cute or what? With lots of new arrivals/future mini cyclists in our circle of friends, we’ve also got some new Back of Beyond Cycling babygrows. 🖤
New Back Of Beyond Cycling logo tees now online - hand-pulled screen print on charcoal Softstyle cotton t-shirts. Unisex and women’s-specific cuts available. Link in bio. ✌️
An ode to last week’s 👌bikepacking trip around the north of Scotland. 🎨 Blog write-up to follow soon.
Sometimes you get rained on but it’s OK.
Loading Comments...
%d bloggers like this: