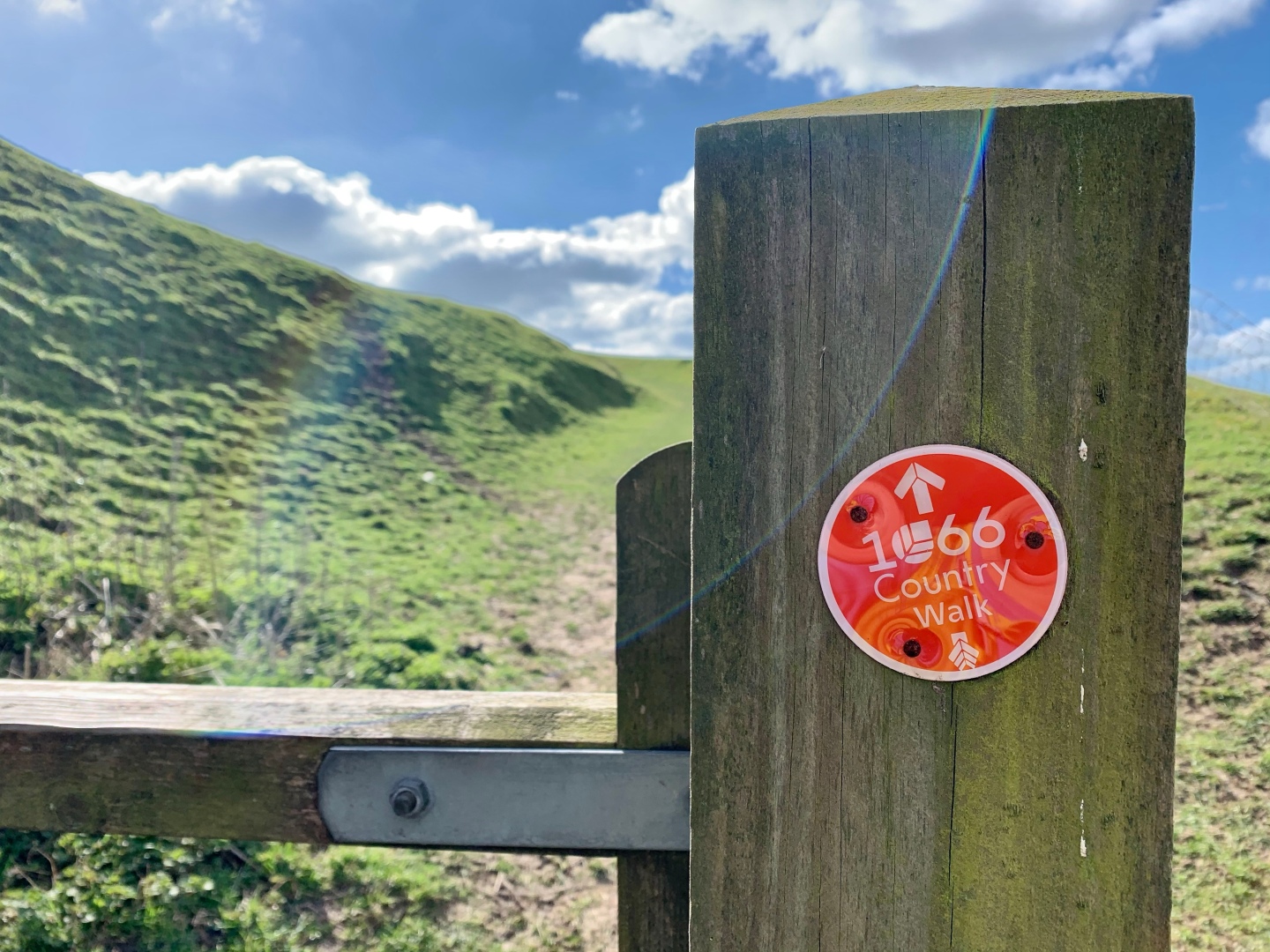 1066. OK, maybe I missed that particular history lesson, but I can’t say that that number meant anything to me growing up in Austria. Here in Sussex, of course, every child knows this was the year of the Battle of Hastings. In the September of that year, William, Duke of Normandy landed his army in Pevensey, just a couple of miles from Eastbourne, and is said to have marched to Rye, fighting the Battle of Hastings in..well, (what’s now called) Battle and defeating the Anglo-Saxon King Harold along the way. This marked the beginning of the Norman conquest of England.

I’m no fan of warfare, obviously, and the real impact of the event, at the time, is widely debated but if nothing else, one has to enjoy the myths and legends that this date still evokes and how all of this somewhat continues to coin the local area.

So is the case for one of our local long-distance walks: The 1066 Country Walk is a 31-mile footpath between Pevensey and Rye, following the footsteps of those Norman conquerers. Don’t worry, even if you couldn’t care less about what happened back in the 11th century, the route is just beautiful, varied and peaceful so bear with me :). Think rolling pixie hills, quiet backroads, woodland paths and open fields.

I had been looking for a slight change of scenery from my South Downs (trail running) training grounds yet wanting and needing to stay local (not least because of Covid restrictions), so had been eying up this route for a while. When it comes to covering big miles (whether on the bike or on foot), I’ve always found it easier to tackle A-B type routes compared to loops and there’s only so many times you get really excited about running back (to Eastbourne) from Brighton, Falmer or Plumpton. Don’t get me wrong, I’ll never tire of the views from up there and that sense of achievement but was thrilled to attempt something different.

Finally a couple of weeks back, a day off work, coupled with a spell of drier weather, meant it was time to conquer the Way (no pun intended! ;)) and it was nice to be joined by a Luke, a Run Wednesdays [that’s my local running club] running buddy.

While I was doing my research I learned that the route has recently had a makeover with some finishing touches being completed as I write. The path has been improved at several points, sculptures commissioned and new way markers installed. The medieval font of its former branding was replaced with a softer type, displaying a leaf instead of the number zero and the spear becoming an arrow to indicate direction. Thank God the colour stayed the same, as these bright little red dots become a bit of a lifeline, especially when legs and mind start to tire..

Doing the maths from our local long runs gave me a rough idea about duration. I also planned the route in komoot from an exciting GPX file, altering the start/end points to take in the train stations and of course reversing the route to start in Rye and end in Pevensey, which felt like the more exciting option for a first attempt! With about 800 metres ascent, the elevation seemed moderate compared with what we often clock on shorter runs on the Downs (although clearly not flat!). “Back at 3.30?”. “Yeah!” we said confidently, which would’ve made it 5 and half hours of running. However, we realised quickly as the day went on that that was too ambitious! Towards the end, admittedly the main aim for me was to make it back in time to pick my son up from nursery before 6 :).

As exciting and beautiful as the route is, don’t expect an easy ride. The regular change of terrain – tarmac, grass, grit, bog, hills, plains, stiles, bridges – may be wonderful to keep your mind occupied but it makes it quite difficult to find a good rhythm. Be prepared to having to concentrate on navigation which I find drains you more quickly too. We’ve come prepared with the route on our GPS watches (and phones) and still managed to get majorly lost (losing about 20 minutes) at least once… shoddy 11th century route planning, eh!

Needless to say, it felt great to finally arrive at Pevensey Castle after 33 miles and more than 6 and a half hours on our feet. I will probably be back at some point attempting it the ‘right’ way round, and who knows, now I kind of know the way, may even have a go at the women’s FKT, hmm…

Never mind the bad selfie/self timer action, love this image so much. Four years ago! 😱
Set forth! .
Cute or what? With lots of new arrivals/future mini cyclists in our circle of friends, we’ve also got some new Back of Beyond Cycling babygrows. 🖤
New Back Of Beyond Cycling logo tees now online - hand-pulled screen print on charcoal Softstyle cotton t-shirts. Unisex and women’s-specific cuts available. Link in bio. ✌️
An ode to last week’s 👌bikepacking trip around the north of Scotland. 🎨 Blog write-up to follow soon.
Sometimes you get rained on but it’s OK.
Loading Comments...
%d bloggers like this: